Lithium batteries are increasingly being used to power caravans, especially for a battery with a 200ah lithium battery. Batteries made of lithium are not only lightweight but also high-performance. Also, long life cycles make them superior to other types of batteries. Many maritime, automotive, industrial, and off-the-grid applications rely on lithium batteries of 200Ah capacities.

Many variables affect how long a 200Ah battery can run, including how much power is being drawn from it. The temperature and discharge rate of the battery affects battery life, determining how long a LiFePO4 battery lasts? Like, 12V and 24V Lithium Batteries with 100 ah are designed to give trolling motors gradual and constant power.

What Is A 200AH Lithium Battery?

Another big advantage of a lithium battery is that it gives 30% more usable power than its predecessor. This is because the AGM battery has a 50% depth of discharge, but the flooded battery has an 80% depth of discharge. In addition, lithium batteries have nearly twice the life expectancy then AGM batteries. If you’re looking for a lightweight, compact battery for your recreational vehicle, lithium is the way to go!

How Many Watts Does a 200AH Lithium Battery Have?

Instead of thinking, what can a 200Ah lithium battery power in terms of watts, let’s focus on watt-hours. At any time, the wattage can change. By using the following example, if a battery provides ten amps at 12 volts, the wattage is found:10 amps x 12 volts = 120 watts.

In general, the power in watts increases by a factor of two when that same factor increases the amps. On the other hand, a battery’s energy capacity is measured in amp-hours, which consider time, and a watt-hour is a unit of energy. When you multiply 200Ah by 12V, you get 2400W. When sizing batteries and solar panels for solar charging, I like to utilize watt-hours as a simple unit of battery capacity.

Manufacturers connect multiple cells in series to generate larger battery packs of 12V, 24V, 36V and 48V Models. They have the following features:

The lifecycle of 200Ah lithium batteries is the longest. The DOD is outstanding at 80% under-regulated settings, allowing 3000-4000 cycles, compared to group 8d Lead Acid batteries 600-800 cycles. That is why most of the boat owners of the trolling motor prefer a 200ah battery for fishing and boating.

Most LiFePO4 batteries last ten years, compared to three years for Lead Acid batteries. Such an example is the Ampere Time battery with ultimate lifecycle backup.

Some manufacturers include a free app with a 200 ah battery that allows you to monitor your cell’s voltage and temperature remotely. A cell imbalance, for example, can be immediately discovered this way. For example, the Zooms 200Ah LiFePO4 battery is equipped with exceptional quality.

Bluetooth versions are available in some 200AH batteries, allowing you to check the health and state of your battery via a phone app. Some batteries come with an extra pair of Battery monitors to do the voltage test, charging test or cranking test.

The built-in battery management system(BMS) is significantly superior. Most 200 Ah batteries incorporate an embedded BMS with a restart button for quick recovery in recent years. The BMS protects the battery from overcharging, over-discharging, over-heating, and short-circuiting. Its best feature is automated cell balancing, which helps the battery last longer and performs better.

Lithium batteries come in a variety of voltages from 12 to 48 volts but can be custom produced with higher voltages. Following are the details: 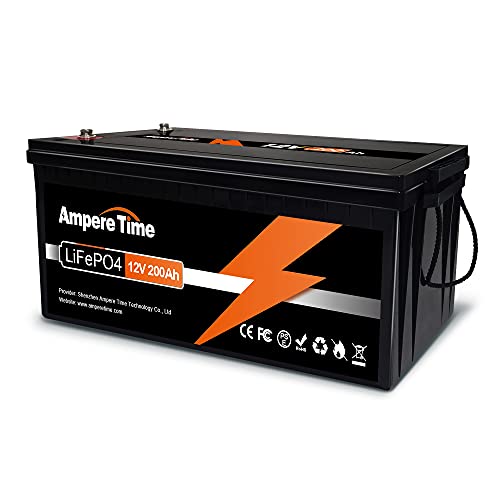 The 12V lithium-ion battery is lighter, smaller in size, and more efficient than other batteries. For example, the Ampere Time 12V 200Ah Lithium Iron battery is a popular one that provides constant power.

12V lithium-ion batteries charge and discharge faster and more efficiently than other battery types, such as lead-acid batteries. Due to the numerous issues with using other battery packs, you can only discharge them to 80% at their maximum pace. 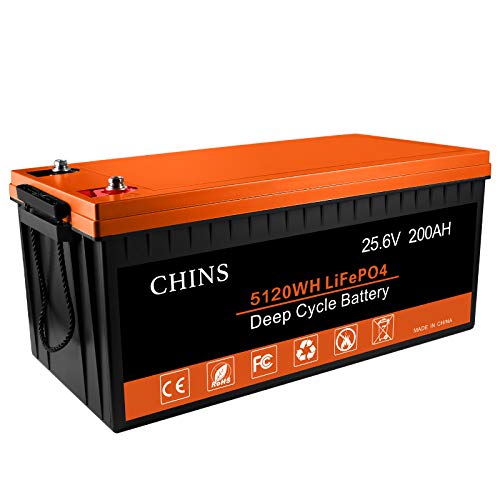 The 24V lithium-ion battery pack can be built from 5Ah to 200Ah. The Chins LiFePO4 24V Battery has a larger energy density, a more steady performance, and greater power than other materials.

Lithium-ion battery packs with a voltage of 24 volts have a shelf life of about two to three years. You should use 24-volt batteries if you are operating a vehicle with a capacity of 24 volts or more.

The Ampere Time 24V 200Ah battery has double the capacity and extension capability of a 24V 100Ah battery from a competing company. Usually, Lithium-ion batteries are often more expensive than batteries with similar chemical compositions.

The 36V battery has nominal voltage achieved by connecting 12 cells in series, with an actual voltage of 38.4V. A wide range of sectors uses 36V lithium-ion batteries, including electric bicycles, underwater items, power tools, medical devices, and assistive technology. A 36V lithium-ion battery system provides a rapid rate of charge and discharge, which can boost the overall efficiency of your product.

The resistance, capacity, load, and discharge rates are all identical across the board in 36-volt lithium-ion battery packs. To keep the 36V battery in good condition, charge and release it thoroughly every two to three weeks. Also, keep running the heap until it either shuts down or displays a low-force indicator, then remove it from the gadget.

A nominal voltage of 48 volts is provided by 16 cells connected in series, while the actual voltage measured is 51.2 volts. It is used in many real-world applications, including household energy storage systems and backup power supplies for data centers.

Using 48V lithium-ion batteries over lead-acid batteries has various benefits. These include smaller size and weight, higher charging and discharging efficiency, greater safety and stability during storage and use, and longer useful life.

These are some of the most common 200Ah LiFePO4 deep cycle batteries, with their key characteristics and specifications:

1. Is Lifepo4 Better Than Lithium-ion?

2. How Long Does It Take to Charge a 200 Amp-hour Lithium Battery?

A 200AH battery will be fully charged in 24 hours at the C-20 rate if it has reached 100% discharge or a terminal voltage of 10v. The lower output charger will take 20 times longer, or roughly 480 hours, to complete the task.

5. Is Lifepo4 Better Than Lithium-Ion?

200ah lithium batteries can store and release a lot of energy. I hope this post helps you choose the correct 200ah lithium-ion battery for your application. Although these batteries have Battery Management Systems (BMS) that protect the battery from undesirable events, it is preferable to be cautious than sorry.