So is it ok to leave the Ryobi battery on the charger? After all, leaving batteries charged for an extended period of time can result in overcharging and overheating the batteries.

Leaving Ryobi batteries on chargers for a lengthy period of time can cause damage to both the charger and the device. Unplug the battery when charging is complete unless otherwise specified. Chargers do not always switch off automatically when a battery is fully charged.

So what about modern chargers like STD, AGM, and Gel? Can you leave a lithium battery on the charger? According to some, the original lithium battery technology does not cause any harm. However, this is not a possibility.

Ryobi chargers can accept three types of batteries: Ni-MH, Lithium-Ion and Ni-Cad. It’s critical to know what kind of battery and charger you’ll be using. It’s possible that using the wrong charger could result in overheating and inappropriate charging. Ryobi batteries can be found in a variety of categories on the market today, such as:

Ryobi had only one 4V and one 12V Battery in use for the time being. An inspection camera and three power screwdrivers were all that Ryobi’s 4V tool line had to offer. It is known as the “Tek4,” and Ryobi 130166025 Tek4 4-V Lithium-Ion Battery has a life expectancy of six times that of an AA.

On the other hand, only a few drills remain in their 12-volt line, and they’re getting more challenging to find nowadays. So those searching for a 12v can use Ryobi 1400652 Battery as a replacement for a 12v battery.

Many various versions of Ryobi’s 18V batteries are available, each with a varied “runtime” and, in general, a larger Ah battery provides a little more electricity to your tool.

When it comes to Ryobi’s 18V portfolio, there are two battery types to choose from: lithium batteries and lithium+ batteries. Even though both of these batteries are made of lithium-ion, their capacities and life expectancies are vastly different. Some popular 18v batteries such as Ryobi ONE+ HP 18V 1.5ah, Ryobi 18-Volt ONE+  and  Ryobi 18-Volt ONE+ Lithium-Ion 4.0 Ah Battery provides long-term performance. Regarding charging these batteries, a few users ask me, “how long do I charge Ryobi 18v battery?” Depending on the kind and power of your battery, charging time can range from 55 minutes to 3 hours and 20 minutes.

Ryobi has five different 40V batteries that range in capacity from 1.5 Ah to 5.0 Ah. When it comes to weight, charge time, and features, all Ryobi 40V batteries are relatively comparable. Depending on the load, a 40-volt lithium battery can last up to more than 40 minutes on a single charge. Compared to other batteries, this one is stronger. 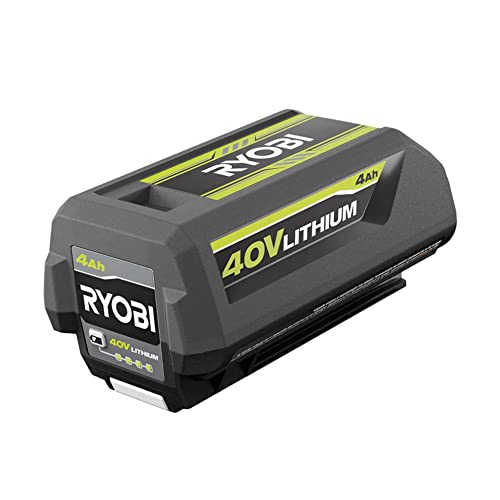 However, the capacity is where they diverge, and that, of course, results in a price difference. Some Ryobi 40v batteries can handle larger and more demanding tasks, such as Ryobi 40V 4.0 Ah and Ryobi 40-Volt Lithium-Ion 6 AH batteries. They can be found as a kit with battery and charger together like,

Is It Ok to Leave Ryobi Battery on Charger?

It’s not a good idea to leave the Ryobi battery on the charger. Please remove the battery from the charger as soon as it has finished charging unless the tool’s instructions state. Overcharging can limit the life of a battery and damage it, and not all chargers automatically cut off when the battery is fully charged.

So you may ask, how long can I leave my Ryobi battery in the charger? If a 1.5 a/h battery is entirely dead, it will take 1.5 hours to charge using a charger that charges at 1 amp and 60 minutes to go from empty to full! A circuitry stops the lithium batteries from fully discharging, or else they will never recharge.

Dos and Don’ts When Charging a Ryobi Battery

If you take excellent care of your battery, it will last longer. Below are some do’s and don’ts that direct you on how to care for rechargeable cordless tool batteries.

Keep in mind that inactivity reduces battery life. It’s best to buy a battery that you can recharge before using it if you only use it sometimes.

Do a Full Charge

Always try to keep the battery charged, and most chargers offer a full charge indicator.

Keep the Battery in a Cool and Arid Place

Storage of Ryobi batteries in a dry, climate-controlled place helps extend their lifespan. Keeping batteries in the freezer isn’t vital for their long-term safety.

The battery should be stored in its original case or a soft bag. Use the battery’s plastic cap to prevent short-circuiting and to protect the battery’s terminals from moisture or breakage.

Have a Spare Battery

You should always keep a fully charged backup battery on hand in case you need to swap it out in the middle of a project.

Make sure the battery is fully charged and ready to go.

In order to keep batteries charged, many people utilize extension cords with battery chargers, and it’s wise not to use an extension cord to charge the battery.

Deep draining a Ryobi battery damages the poles and reduces battery life. Instead, replenish the battery as soon as your tool slows, except for NiCd batteries with memory effect, never deep drain.

Remove the battery from the charger after charging unless your tool’s instructions specifically indicate to do so. Yes, it is bad to leave rechargeable batteries in the charger for a long time because not all chargers cut off automatically when a battery is fully charged.

Heat can kill or burst Ryobi batteries. Are those interested in knowing what happens when you leave a battery on a charger? Now acknowledge that it can overheat and destroy the circuit that damages the battery and charger. Always allow the battery to cool before recharging or using it—no hot car, attic, or storage location for rechargeable batteries.

When using a Ryobi battery, avoid submerging it in water. Remove any moisture from the tool or battery as soon as possible.

1. Should Lithium-ion Batteries Be Taken Off the Charger When Fully Charged?

Yes, it’s important to prevent overcharging a lithium-ion battery when you’re recharging. Modern batteries don’t require a full charge and discharge when they’re fresh out of the box.

All of Ryobi’s older 18-volt lithium batteries will operate perfectly in any of their older models. Few users also asked me Can I Charge a Lithium Battery With a Normal Charger? However, you’ll need to get a lithium battery charger for lithium battery because the old NiCad charger would not work.

3. How Much Time Does It Take to Charge a Ryobi 40v Lithium Battery?

4. What Do the Different Coloured Lights on Ryobi Charger Represent?

The different coloured lights on the Ryobi charger represent:

5. Why do Ryobi batteries keep dying?

Sleep Mode is to blame for dying. This occurs when the battery is almost fully depleted of its juice. The battery is used to the point of death, and a long shelf life causes it to lose even more power.

Leaving your Ryobi battery in the charger will drain its power. So after reading the full article, you are clear whether it is ok to leave the Ryobi battery on the charger. As long as your charger features overcharging protection, you should be good to go! Some chargers don’t have this feature. It’s a good idea to take your battery from the charger after it’s fully charged.

Take into consideration your battery’s dimensions, kind, and voltage before you choose your charger. You can also use a wide range of safety features and convenience features available to you. I appreciate you taking the time to read this, and I hope you had a great time.